Nigel Stonier is known primarily as a collaborator. A producer, multi-instrumentalist and writer, his musical adventures have seen him wear these hats in various combinations for a wide range of acts including Thea Gilmore (all of whose albums he's produced), Robert Plant, Martha Wainwright, Fairport Convention, Gretchen Peters, Mike Scott and the Waterboys, and Clare Teal. But there’s another very wonderful side to Nigel Stonier.

Nigel Stonier is also a solo artist. And rather a musical revelation to those who have discovered this. Take a listen to the striking, engaging array of contemporary songs and ideas on his forthcoming album. In fact, Love & Work is Nigel’s sixth solo album; it follows Built For Storms from three years ago. The album title is from the quote “Give me love and work, these two only” by polymath/artist William Morris. Nigel explains: “As you move through life there's probably a heightened sense of what's important, a paring down to essentials, things that matter. The 'love and work' quote is just great in its simplicity — we're all much better when we've got plenty of both, right? I decided this time the title was gonna be all about brevity. Love and work.”

Love & Work features Robbie McIntosh (Paul McCartney, The Pretenders) and Chris Hillman (Billy Bragg) on electric/slide guitars and James Hallawell (Graham Parker, The Waterboys) on Hammond organ, and Thea Gilmore on backing vocals. “I recorded in Manchester because I wanted to work with Seadna McPhail, who's a wonderful engineer/producer who's recorded the likes of Badly Drawn Boy and I Am Kloot. He and I co-produce when it comes to my stuff, but he has power of veto as it’s impossible to be the artist and have that detached overview you need from a producer."

The single is the gorgeous You Need Love. "I wrote most of the lyrics to ‘You Need Love’ on a train to Cambridge. I had a conversation with a friend the day before which was nagging at me. It wasn't a song I was planning to write; it arrived very quickly. I had no notion of it being a single either but luckily people seem to love it and it's had a lot of airplay,” explains Nigel. The track Turnaround Town, to pick out just one other example, is deliciously compelling, scathing, thought-provoking. “I like people to put their own meanings to stuff, I don't really believe in putting a big official stamp on a song saying 'THIS is what it's about’. I guess Turnaround Town is somewhere where everyone at times has to go and be something else, someone else...to sort of 'join in’. When I hear it now, there are just so many different people who make fleeting appearances in that song.” Please find links to these songs and artwork below.

Here’s what Neil Gaiman says of Nigel Stonier: "Literate, melodic, and quirky in all the best ways.” And that’s spot on. Nigel’s one of our very best. 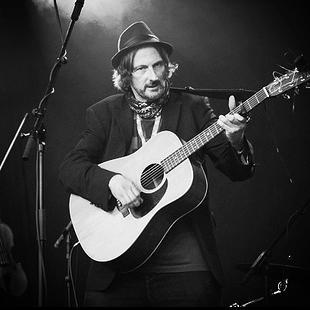