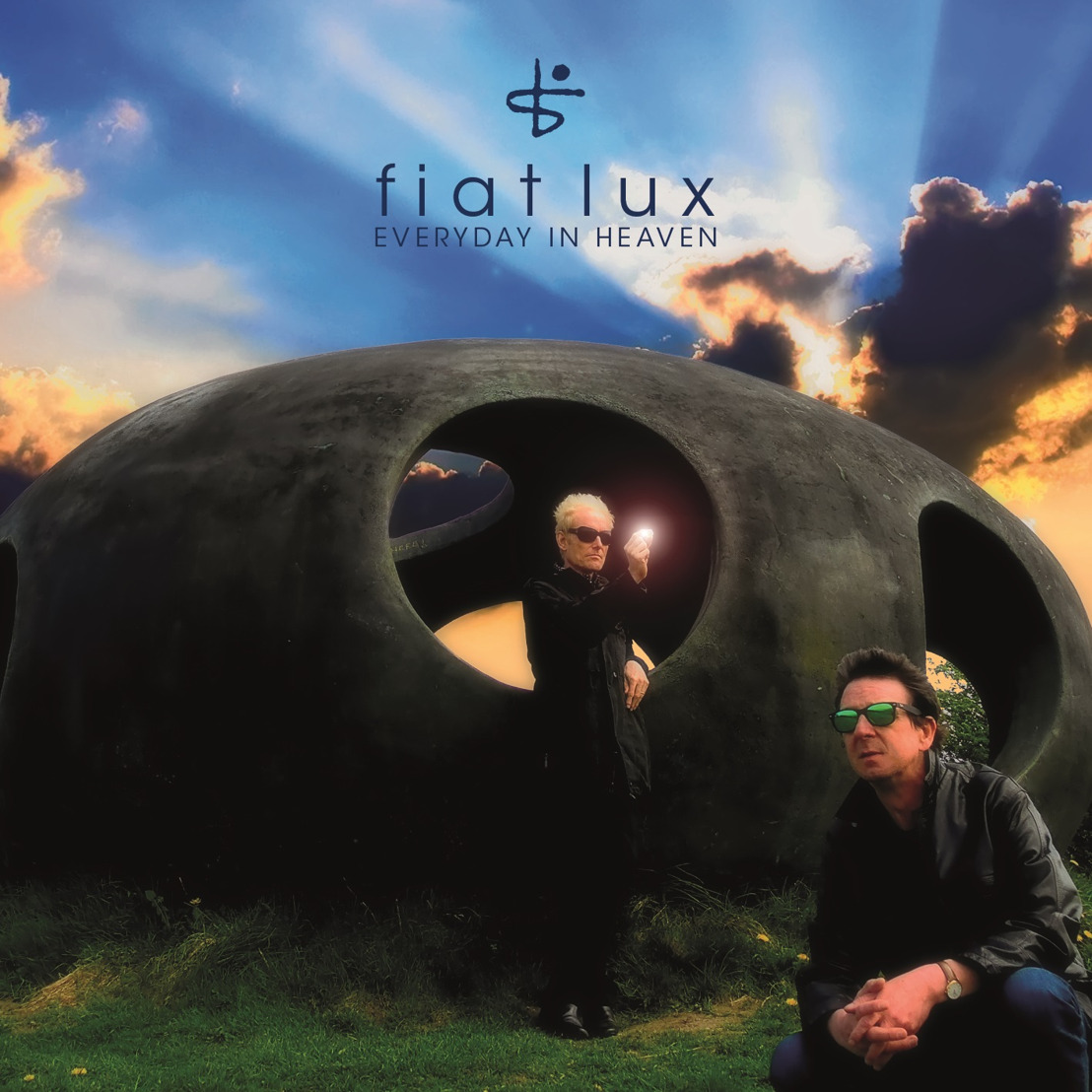 The band's only previous long-form release, the mini-album Hired History, came out in 1984. Hired History was released by the major label Polydor — yet the band would split the following year due to Polydor's mishandling.

But now Fiat Lux is to rise again. It's a remarkable return! 35 years later!

This is the band's first long-form release since 1984.

And the new single Everyday In Heaven (cover art pictured above) is due Feb 1st 2019.

Forthcoming single Everyday in Heaven is a prime example of the re-energised close collaboration between David P Crickmore and Steve Wright as joint Fiat Lux lyricists and songwriters, evoking the classic Fiat Lux sound and songs such as Secrets and Blue Emotion. Tape rolled, synthesisers were switched on and the song was born. Session drummer Andy Peacock and saxophonist Will Howard were called back to the studio specially to complete the track. Hearing Everyday in Heaven is a wonderful way to experience Fiat Lux.

The band's name means “Let There Be Light”...

Saved Symmetry is the next step for the reformed Fiat Lux, after the great reception and encouragement received from followers and radio stations around the world when the band put out their soft-launched remake of Secrets in 2017 and the subsequent freshly-written single It’s You in 2018. Both feature in Saved Symmetry.

The pair had been buoyed by the ease with which they regained the Fiat Lux sound and how enjoyable it was to work together again, freed from the major label constraints and let downs of their early years.

Creativity came easily and with a collection of songs that mixed “unfinished business” — fragments of ideas that would have been intended for Fiat Lux had they continued further in the 1980s  — and freshly conceived new material written whilst in the studio, the album progressed at full speed ahead.

References to their signature sound abound with analogue synthesizers, growling bass, acoustic and electric guitars and the meld of electronic and real drums forming the bedrock for Steve’s distinctive vocals and David’s counterpoint backing parts.

There is tribute to Bill Nelson, who first discovered and produced the original duo, with (David’s) “Nelsonic” E-bow guitar on some tracks. Bill’s brother, who became the third band member, the late Ian Nelson, is duly and respectfully referenced with the inclusion of session man Will Howard on some suitably Ian-like sax and clarinet breaks.

Produced by David P Crickmore, the album’s soundscapes conjure up a modern take on the atmospheres present on the Hugh Jones produced Polydor releases, a tip off the hat to the wizard of sound that David happily acknowledges “taught me all I know about what to do in recording studios.”

"Guitars I play on the album are my Gibson SG light blue as used back in the 80s, and a 60s Fender Strat plus Martin acoustics. The bass guitar is the same model Yamaha BB1000S that I used on the Polydor sessions, but I had to track another early 80s edition down as my original bass went astray in the mid 80s. Classic analogue synths used include a Mellotron, a Mini Moog, and a Roland Jupiter 8," says David.

And then, in further Fiat Lux news!!!

In further news — we understand there are moves afoot to release the full Fiat Lux back catalogue of intended-for-release recordings in Spring 2019 date tbc for the first time ever, including it could well be: early recordings, previously unreleased tracks, and a whole lost album never heard before titled Ark Of Embers (The Lost Album).